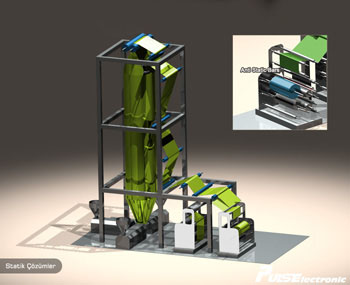 As the balloon blowing method is used in extruder machines, the inner part of the balloon is charged with same polarity charge with respect to the outer part with static electricity. When the balloon is folded, the faces loaded with the same polarity faces to each other. At this moment, one of the static electricity laws causes the objects loaded with the same polarity to repell each other. This is an undesirable situation. When the ball is blown up, static electricity is neutralized by inserting the Puls anti-static bars at the point where it is folded. If airless winding is required during the winding, air is blown out of the winding roll by charging static electricity on a roller Accordingly the material is perfectly winded so that unintentional opening and slippage on the roll is prevented. Placing a static receiver separately at the winding end of the machine, which is the last point of the machine,will prevent dusting during waiting.